I'd like to once again say a massive thank you to the people who have made it happen - Liam Gaughan for recording and mixing the track, Jonny from Softwhere for producing a spectacular video, Jon Paylor for his photographic contributions, and finally my Dad for sparking the idea and giving me an important starting place (the title)!

Here is the video - please share, and leave a comment to let us know what you think!

For those who are interested, here is some background of how I went about writing, recording, and releasing the song.

It was hard to know where to start. I decided to do some research online, and immediately discovered a mass of heartbreaking stories - just type "Typhoon Philippines baby" into Google and you'll see what I mean. Stories of women having to walk for miles while in labour just to get to the nearest makeshift clinics, with few medical supplies, often with no power, clean water or proper lighting, some even without a roof, fighting against the consistent rain with only a tarp overhead. Stories of the struggle after the babies are born, like exhausted parents having to use a handheld pump to help their new born breathe as it is the only ventilation support available. But heartwarming stories too, of 'miracle babies', and the couple who named their son Yolando, the masculine version of Typhoon Yolanda - "it's because we don't want to forget what we had to go through and because we got another life" (father, Meller Balabog).
These stories had a huge influence on what came to be 'Baby of the Storm', as I have absolutely no personal experience of what life must be like in the aftermath of such a massive natural disaster. I don't have children of my own, but being an aunt and seeing my sisters give their children everything that they possibly can, to give them the best life that they can, provided me with the vital link that I needed to relate the stories to something personal. I have tried my best to put myself in the shoes of one of these mothers; it is always challenging to write from someone else's perspective, and this is certainly the most challenging song I have written so far. I have no experience of what life must me be like out there, nor do I have any children of my own; I do have several nieces and nephews though, so this was my strongest emotional connection to imagining a little bit of what these mothers, wanting the best for their child, might be feeling.
From there, I did some free writing, which led to my first chorus that I wrote sat on a train - it was catchy but horrendously cheesy. Still, a good starting place - a couple of the lines made it into the chorus as it is now! I started getting frustrated though, when I couldn't find anything to fit with the chorus that I had. So I played around with some chord progressions, and did a lyric writing exercise I have been experimenting with called 'object writing', which helps generate very sense-bound language. I ended up taking many of these initial phrases and using them to start each verse (such as "I wish the first sound you heard was laughter", "I wish the first face you saw was your father's", and so on). These phrases, along with the chord progression and bits of my original chorus, led to a brand new melody and the rest of the words. I wrote most of it sat on my bed and wouldn't let myself leave until I'd got it out!
Sadly, a more recent Google search has shown that the struggle continues into the new year for the babies and mothers born when the typhoon hit, and for pregnant women preparing to give birth now.
“Many [expectant mothers] have lost their homes. They are now living in unhygienic environments. There is still debris in many areas of Tacloban”
"The babies’ deaths were likely related to the health of their mothers rather than the lack of access to medical facilities… a shortage of adequate shelter and proper nutrition following the typhoon could have affected the pregnancies".
Taken from an article by Chris Larano. Read in in full here.

Once I had the song, just a vocal and simple guitar accompaniment, I left it at that to reflect the personal, intimate relationship between a mother and child. Now I needed to record the song, and who best to help than Liam Gaughan? He also recorded my album 'Take Flight'. Liam is a fantastic engineer, and also very sensitive to connecting the emotion of the song, which was of paramount importance in this case. We simultaneously came up with the idea for the tune at the start to be played by a music box, as it seemed so fitting. A bit of editing and mixing followed, and that was that.
Next up, I really wanted a music video, as a strong visual image could lend itself to an even stronger emotional connection to the song's message. If you have followed my music over the past few years you will know I have collaborated a few times now with 'Softwhere', on their songs and on my own. Rather than performing live, 'Softwhere' put their songs to video, and have produced some really interesting and moving videos. I couldn't think of anyone I would trust more to making a fitting music video, and thankfully Jonny agreed. We both decided it would be particularly powerful to include some real news footage from the Philippines. Unfortunately I was unable to obtain any video footage (copyright issues were an absolute nightmare), I did manage to get access to lots of fantastic photographs, I owe a huge thank you to Jon Paylor, a family friend who also happens to be a Royal Marine, and took loads of great photos when they visited the Philippines to help build shelters just before Christmas. And a big thanks as well to all those photographers who made their pictures available through Flickr Creative Commons (see video for individual credits).

The next question was how to release the song. I have self-released music twice before - my single 'Neck of the Woods', and then my album 'Take Flight'. Both times I used standard digital distribution methods, paying a small fee to get my music up for sale and streaming on the likes of iTunes, Amazon, Spotify, and so on. But this time I didn't want to do that, for a few reasons. First and foremost, I wanted the charity to get as much money as possible, without a sizeable chunk going to the stores (iTunes takes about a third, I believe). To further this, I also wanted people to have the option of how much they wanted to give, rather than pay a standard 79 pence. And, I wanted the charity to get the money as quickly as possible - as anyone who has ever self-released music will know, it takes several months for you to even find out how many copies you have sold, let alone get the money through for it. I also wanted people to feel secure about where their money was going - directly to the charity - rather than going through me first and then passed on.

I did quite a bit of research into various options, and the best way to achieve all these requirements was to set up a charitable giving webpage, with the added bonus of Gift Aid. There are many to choose from, and I looked into a few - Virgin Money was high up on the list of the maximum amount going to charity, not that there was much in it, then what sealed the deal was the page layout and the connection with YouTube as I really wanted the option to embed the video on the page.

So, that's it - and you can now visit the page! If you donate as little as £1 (or as much as you like!), you will receive an automatic 'thank you' email containing a link to download the song. Any support is appreciated. We can all do a little bit to help these mothers, babies, and their families. PLEASE SHARE with others you think may be interested in the cause. Thank you for your support! x x x

Posted by Meghann Clancy at 16:08 No comments:

Baby of the Storm

I wish the first sound you heard was laughter
But the thunder overhead rumbled to your core
You were born amid panic, disaster
Forces of nature at war 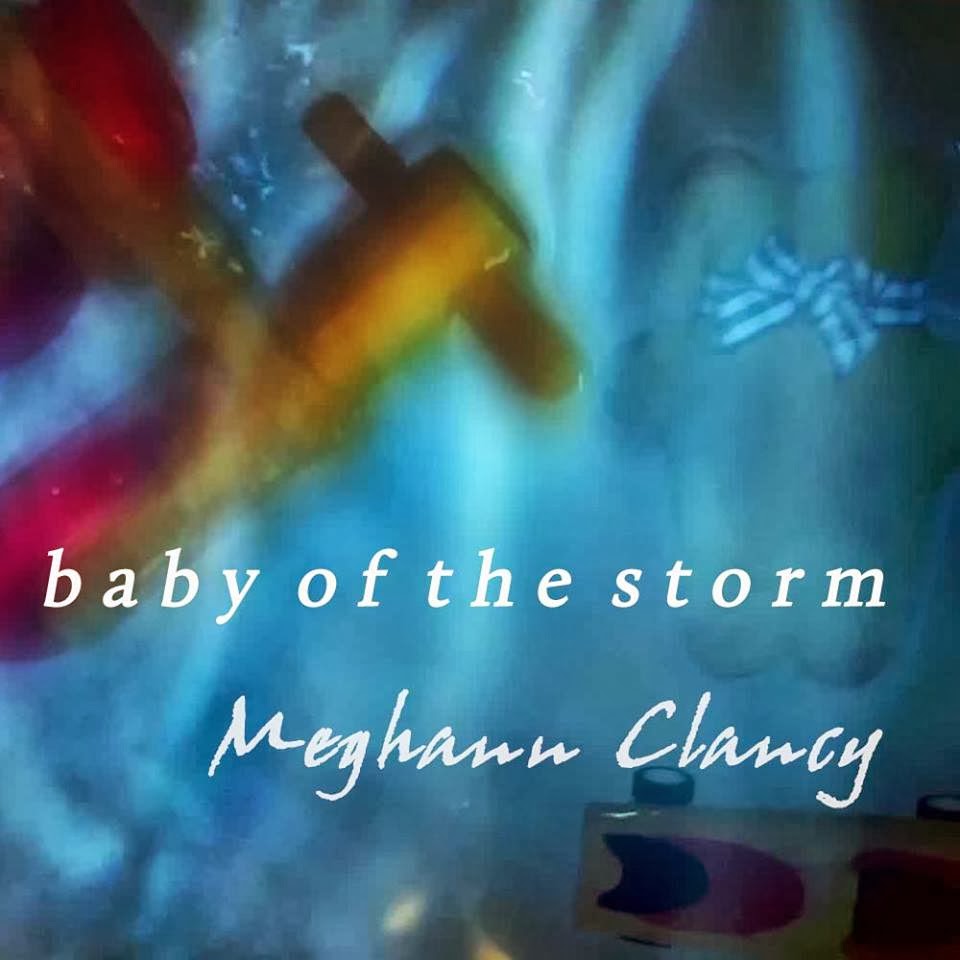 I am excited to announce that my new single, to raise funds for the Disasters Emergency Committee, will be released in 2 days time!

On the day I will write a new post with details of where to get it, and where to watch the music video. Not long now....

Posted by Meghann Clancy at 10:42 No comments:

It all started with a text...

Thu 14 Nov 18.48
"Meghann you should write a song and call it 'Baby of the Storm' all the money to go to Philippines, what do you think?"


Typhoon Haiyan struck the Philippines on the 8th November 2013. The following week my Dad sent me the text you see above, after watching a news story about a baby being born amongst rubble in the aftermath of the storm.

What did I think? - Challenge accepted.

So, all I had to work off was a title, but that was a start.

I'm very pleased to announce that from that title, a song was born. I recorded it just before Christmas with Liam Gaughan (one of Newcastle's finest producers). Since then I have been working on the music video with massively talented filmmaker/musician Jonny from Softwhere. Everything is almost ready to go, and should be available in the next couple of weeks.

I just wanted to give you a heads up, and once it's out there in the world please, please share it with everyone you can - all proceeds are going to the Disasters Emergency Committee (DEC) - let's raise as much money as we can!

We're all really excited to share it with you. For now, I leave you with an incredible photograph that we have been lucky enough to use in the video. Photo taken and passed on by Jon Paylor, just one of many he took on a recent trip to the Philippines with the Royal Marines.

Posted by Meghann Clancy at 12:20 No comments: