Wise words there Will Smith and Jazzy Jeff. So, I haven't written a blog in a little while, but I've quite a bit to catch you up on! You may or may not know that part of my job is as an instrumental/vocal tutor, mostly in schools, and since it is the school summer break I've been off on my holidays :)

It was a pretty busy last week of term, culminating with school concert featuring my singing, keyboard and guitar students, and they all did wonderfully! It's the best time of the school year getting to watch them show off everything we've been working on all year, and getting all the praise they deserve. Proud teacher!

After that, the semi-epic road trip began... First stop was Lincolnshire, for a good friend's wedding. It was an absolutely perfect day all round, congratulations Sarah and Matt! It was also a massive honour to be invited to sing a couple of songs - between the Father-of-the-Bride and Groom's speeches no less, which was pretty nerve-racking to say the least - but I fully enjoyed it and hope it was a memorable part of their special day :) Also lovely to be reunited with university friends! (If anyone is wondering, the songs I sang were at Sarah's request - "The Blower's Daughter" by Damien Rice, and "More Than Words" by Extreme. I don't know if there are any photos or videos, but will post them if I see any!)

Here is a photo of the beautiful bride and bridesmaids - looking good ladies! 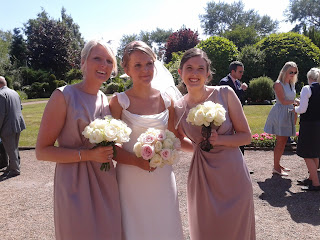 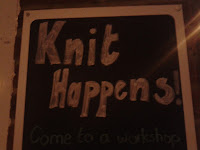 After the wedding, I had a flying stop back to my Mum and Dad's in Yorkshire, then shot off in my little car down to Oxford. This is a sign I saw there that I found amusing  ------> 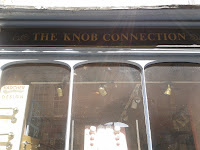 I picked up my fine Aussie friend Steph, had some delicious Nepalese food, began my obsession with Orange Is The New Black (crazy US prison drama), and then headed to Bath! Where I saw more amusing shop signs ------>
(Yes I know, I am so mature. But you love it).


We became ultimate dorky tourists for a couple of days, and enjoyed a torch-lit tour of the Roman Baths, and even the, ahem, sight-seeing bus... Then we drove down to the West Country, stopping off at the very mystical Stonehenge (see dorky photos below). Steph even bought some Mead! 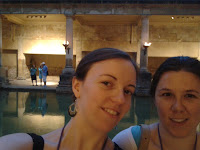 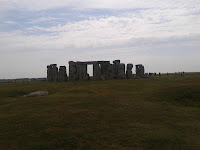 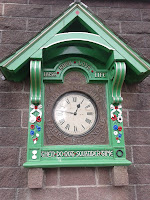 We stayed in Plymouth for a few days to visit our good friend Amy (we all did a year abroad together in Illinois 5 years ago and don't get to see each other that often). On a boat trip across to Cremyll in Cornwall, we saw this clock of very wise words, which I also felt the need to document. In case you can't read the inscription it says "Dost thou love life? Then do not squander time" (Benjamin Franklin), and "Time and tide tarry for none" - I couldn't find the source for the latter quote, apparently it is an ancient phrase. 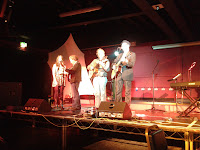 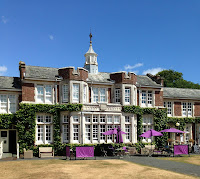 At Plymouth we parted ways, and I journeyed to Newton Abbot in Devon for my first ever songwriting weekend with the London Song Company. I wasn't sure what to expect, and after following a very windy country road, possibly into the wilderness, I emerged at the beautiful grounds of Hannahs (Dame Hannah Rogers Trust) at Seale-Hayne. It was a perfect setting for the weekend, and a very inspiring place to be. The weekend was made up of masterclasses, workshops, one-to-one sessions, writing time and performances.  Below is a list of all the facilitators/performers with links to their websites (how efficient!). I would recommend checking out their music, and also having a look at what LSC offer if you are a keen songwriter.

Alva Leigh (singer-songwriter from the US, currently living in London)

It was an absolutely fantastic weekend, I met so many amazing people and learned a lot. It was great just to have a whole 3 days where the absolute focus was on songwriting and performing, with nothing else to get in the way. I was also lucky enough to be one of the three participants chosen to perform on the Saturday night gig "LSC Fest". I was the first musical act of the evening, and performed "Bite The Bullet".
Here's a couple of photos from the weekend (the live shot above higher up is of Henry, John, Jess and Reg, possibly performing "Don't You Love Me No More"(?) - great song, check it out!) 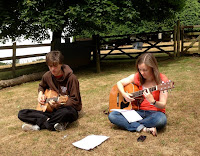 <------
Me and Robin embracing the nice weather while writing our song "A Beginner's Mind", as part of Reg's workshop. You can watch a video about Reg's workshops here. 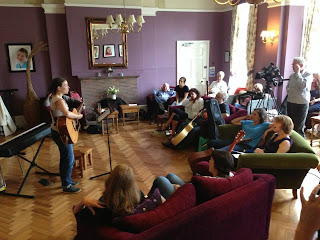 ------>
Me performing my interpretation of the weekend's song challenge, to write a protest song.  Mine was about self-involved people who talk too much. It's called  "Blah Blah Blah". Yep, we all know someone like that (if you don't, it's probably you....)! I will post up a recording of the song soon. Expect something more light-hearted than my usual style haha!

Final leg of the journey... 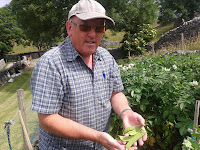 After saying goodbye to everyone at Seale-Hayne, I headed over to Buckinghamshire, listening to new CDs all the way. One of the great things about roadtripping, the opportunity to listen to lots of albums in full! After enjoying some quality time with my sister, brother-in-law and little nephew, it was back up to Yorkshire! Highlights included delicious BBQ with family, and getting to be a proper country-bumpkin and help my Dad out at his immense vegetable plot (seriously, he's got everything!)


On August 1st, I played a couple of sets at Threshfield Court Care home for their fundraising/celebratory event (the manager, Tony, had just completed 6 marathons in 6 days! Article here for more info on #ChallengeTony).

I really enjoyed the afternoon, and especially since my Nan and Grandpa were at one point residents at Threshfield Court, it was nice to be involved in celebrating the great work they do there. I even managed to pull off a requested encore of "My Heart Will Go On"! Here is a couple of shots of my gazebo/stage area: 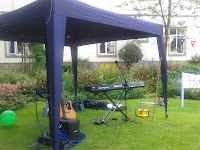 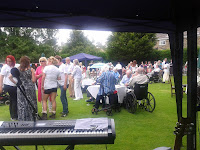 And finally, I headed back to the Toon! For like, a day. Then I went to Leicester with Static Soul for their gig at The Shed - but I didn't have to drive this time!

So, that was a pretty long blog... well done if you made it to the end! To show my appreciation, here is a cute picture of two kittens climbing on my guitar. Enjoy! x x 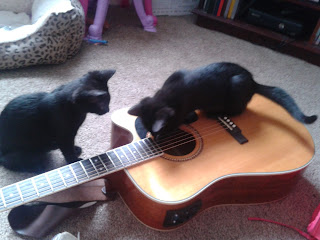